INDIANAPOLIS – Aaron Radford-Jackson was simply driving along when he came upon a harrowing scene. A man was standing in the street gasping for air. Without giving it a second thought, Radford-Jackson jumped out of his truck and ran to the emergency.

Ben Miller, who is a father and husband, is alive thanks to the Vincennes University graduate’s heroic actions and quick thinking.

Miller will never forget the day Radford-Jackson saved his life to such an extent that he spent two years searching for his hero.

The day after nearly losing his life, Miller posted a message on Facebook on Aug. 10, 2018, asking his friends to share the post that featured a photo of Radford-Jackson and Miller taken after Jackson’s life-saving heroics at an intersection in Indianapolis. 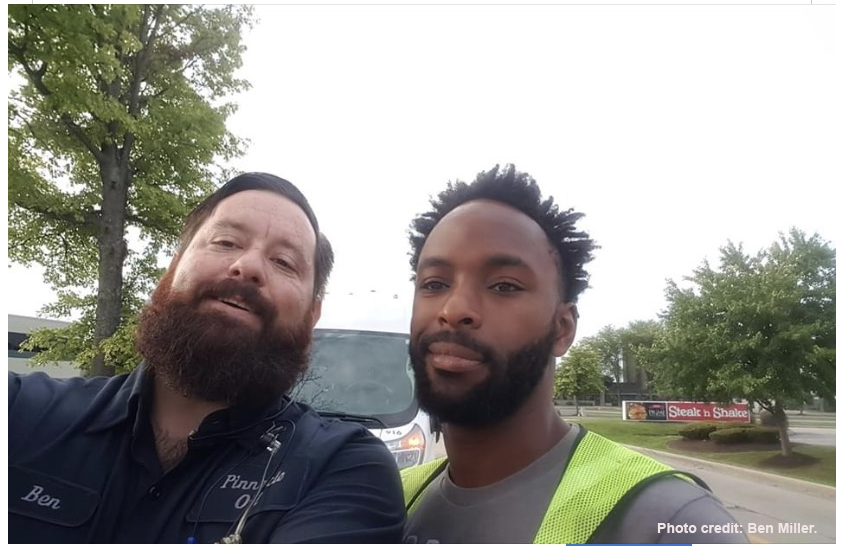 Miller wrote, “What does a hero look like? This is what a HERO looks like. If this post finds Aaron, from the bottom of my heart and with the deepest gratitude I thank you for your quick and skilled actions.”

When asked about the day the strangers’ lives briefly crossed paths, Miller stresses repeatedly that he almost died.

Miller was driving to a doctor’s appointment in Indianapolis when he suddenly began choking after ingesting a bite of a sandwich. Struggling to take a breath, he jumped out his vehicle at a stoplight, looked at a nearby driver, which was Radford-Jackson, and made the choking motion using his hands.

By the time he reached Radford-Jackson, who had exited his vehicle, Miller said his vision was starting to go gray and he was close to passing out.

Radford-Jackson quickly sprang into action utilizing the life-saving first aid skills he learned as a VU student. He performed the Heimlich maneuver on Miller, dislodging the food. The two posed for a photograph, then the Indianapolis residents went their separate ways.

The next day, Miller shared his heartfelt words about Radford-Jackson and his courageous action. He posted, “My wife has a husband, my 2 children have a father, ALL BECAUSE OF YOU.”

The post has received over 1,400 likes and racked up more 1,200 shares. Miller’s message finally reached Radford-Jackson two weeks ago and they’ve reunited. 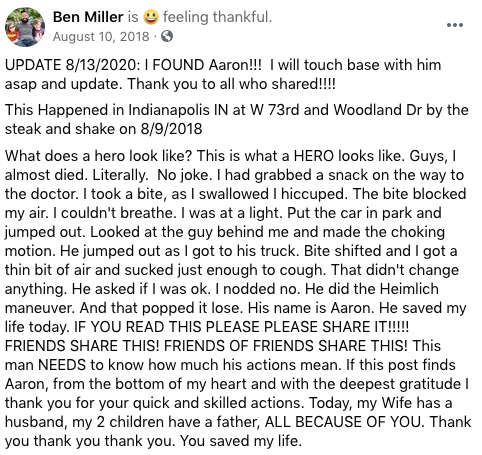 Miller and Radford-Jackson hope to connect soon in person.

“I’ve told him it means a lot to me and my family,” Miller said. “Without someone knowing what they were doing, I would have been dead before an ambulance got there. Aaron was there at the right time. He didn’t panic and he knew what to do. He was real calm and collected. I wouldn’t be here if it wasn’t for him.”

Radford-Jackson is humble and shies away from attention. When the emergency occurred, he mentioned he saved a man’s life only to a few immediate family members.

“I guess God puts people in positions to do what they’re supposed to do,” Radford-Jackson said. “I just try to live my life to the best of my ability. Whether that’s helping somebody or whatever needs to be done, I just try to do it.”

Rather than talk about himself, Radford-Jackson shared an inspirational quote.

He is quick to brush off praise and is hesitant to accept kudos for his heroism. He prefers to thank Miller and VU Physical Education Department Chair and Assistant Professor Misty Bohnert.

Radford-Jackson says without the HLTH 211 First Aid course he took as a VU student in 2012 that he “never would have been able to save a life.” By successfully completing the course, he received American Red Cross certification.

“Always prepare yourself for different scenarios and situations,” Radford-Jackson said. “That’ll help you adapt to it and better prepare you if you find yourself in that situation whenever you may need the things that were taught to you, so you can always keep striving and be the best that you can be.”

Bohnert describes the moment as heartwarming and inspiring. 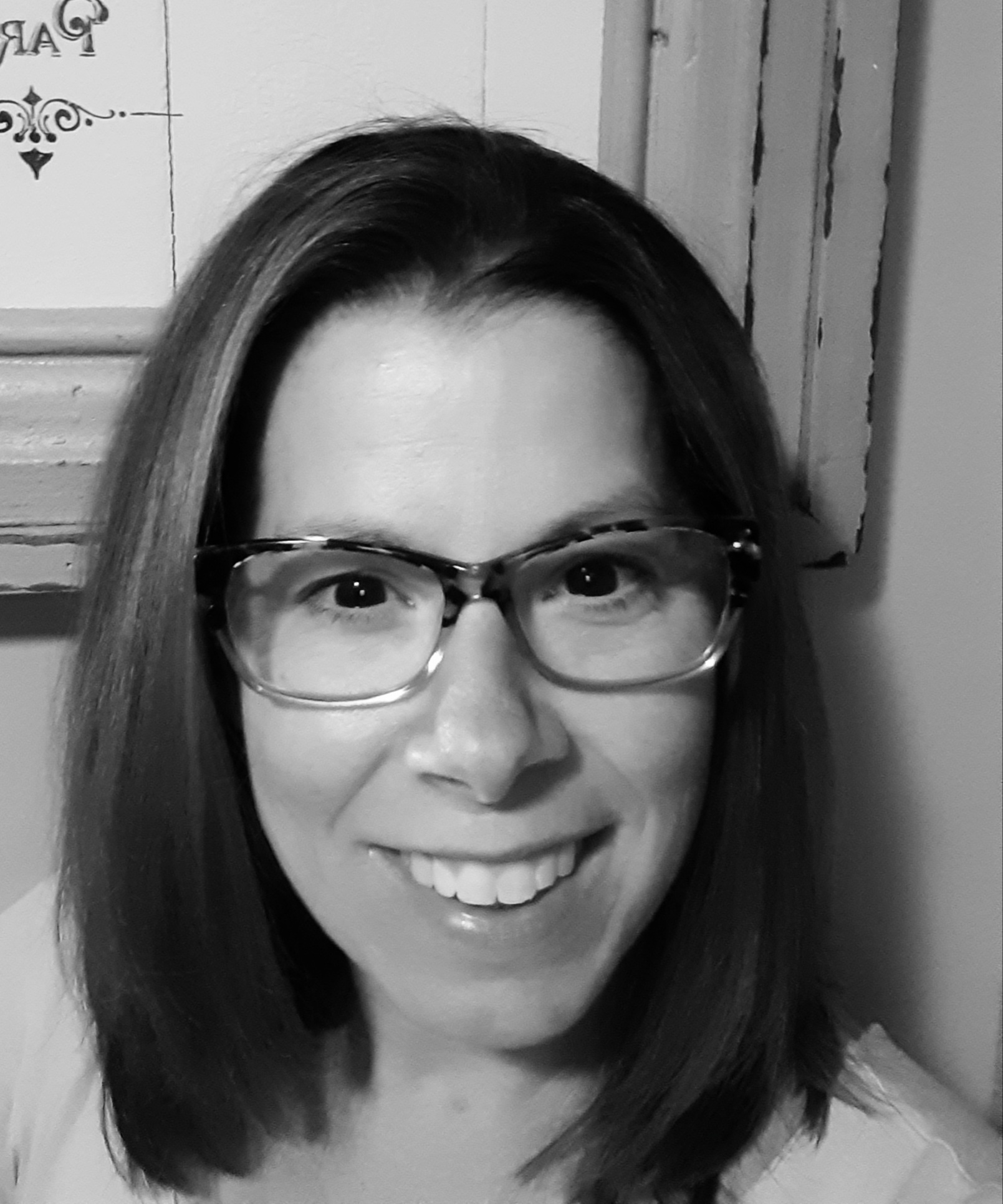 “This is what being a faculty member is all about and sharing this education with the students,” Bohnert said. “I went into this degree field specifically so I could help students take care of themselves and others. I almost started to cry because it was one of those moments that just brought everything together.”

Performing a selfless life-saving act is very much in Radford-Jackson’s character if you ask Bohnert.

“It was not a surprise that he was willing to help someone,” she said. “He was one of the students that you really got to know when he was here on campus.”

Radford-Jackson graduated from VU in May 2019 with an Associate of Science degree in Kinesiology and Sport, Sports Management Concentration.

“Aaron was a multi-dimensional student who was involved in campus activities,” Bohnert said. “He was one of those students who always really made it a point to introduce himself. He is a very dynamic person.

“Ben felt very passionate about making sure Aaron knew how important this was. It was confirmation that there’s a lot of love in this world and there are a lot of people who want to help each other, do the right thing, and be there for others.”

It’s evident Radford-Jackson is someone more concerned with the needs of others than himself.

“I am trying to thank him and he’s thanking me for being there for my kids and spending time with them,” Miller said. “He doesn’t take the credit. He says, ‘I’m glad that you’re there for your family, and I’m like I wouldn’t be here for my family if it wasn’t for you. He is humble and thankful of me, which blows my mind.”

Miller wants another opportunity to thank him for saving his life.

“I could say thank you to Aaron every day for the rest of my life and it still wouldn’t be enough,” Miller said.

Bohnert takes great pride in the fact that the class that Radford-Jackson earned his first-aid certification is still being offered at VU despite the COVID-19 pandemic. She says the course has been offered in the fall, spring, and summer for at least 20 years.

“Health 211 is one of the classes that is still on right now and we have put as many safety measures in place, so we can get these students this practical skill,” Bohnert said. “We have minimized class size, so we can keep students and faculty safe. We did not want to have to cancel it. We are passionate about the fact that this is a life skill that is important, and we want to be able to share it. We have had a lot of students who have come through and learned this life skill that is so important.”