VU Professor Virgil Franklin: Blazing on Stage & in the Classroom

VINCENNES, Ind. - Your heart pumps full of adrenaline. You hear the crowd chanting right before you go out on stage. As you walk out, you feel the lights beating down on you and see hundreds of faces blurring together. With a guitar in hand, you take a deep breath and play.

The nerves make their way through your body, it's not until you start strumming the chords and hearing the audience screaming the lyrics at the top of their lungs that they disappear.

This is what Vincennes University Audio Recording Professor Virgil Franklin experiences when he’s on stage with Nic Strain.

"Small stages are always harder to me than big stages," Franklin said. "For me, playing in front of five or 10 people I know is more nerve-wracking than playing in front of thousands of people because it’s more intimate. I love to entertain. I love to be engaging. I love to be part of a musical family that takes people from where they are to a better place. The energy is what you feed off of, so I can’t say I’ve not been nervous. If you’re not just a little edgy, you're kind of showing a lack of responsibility to your audience." 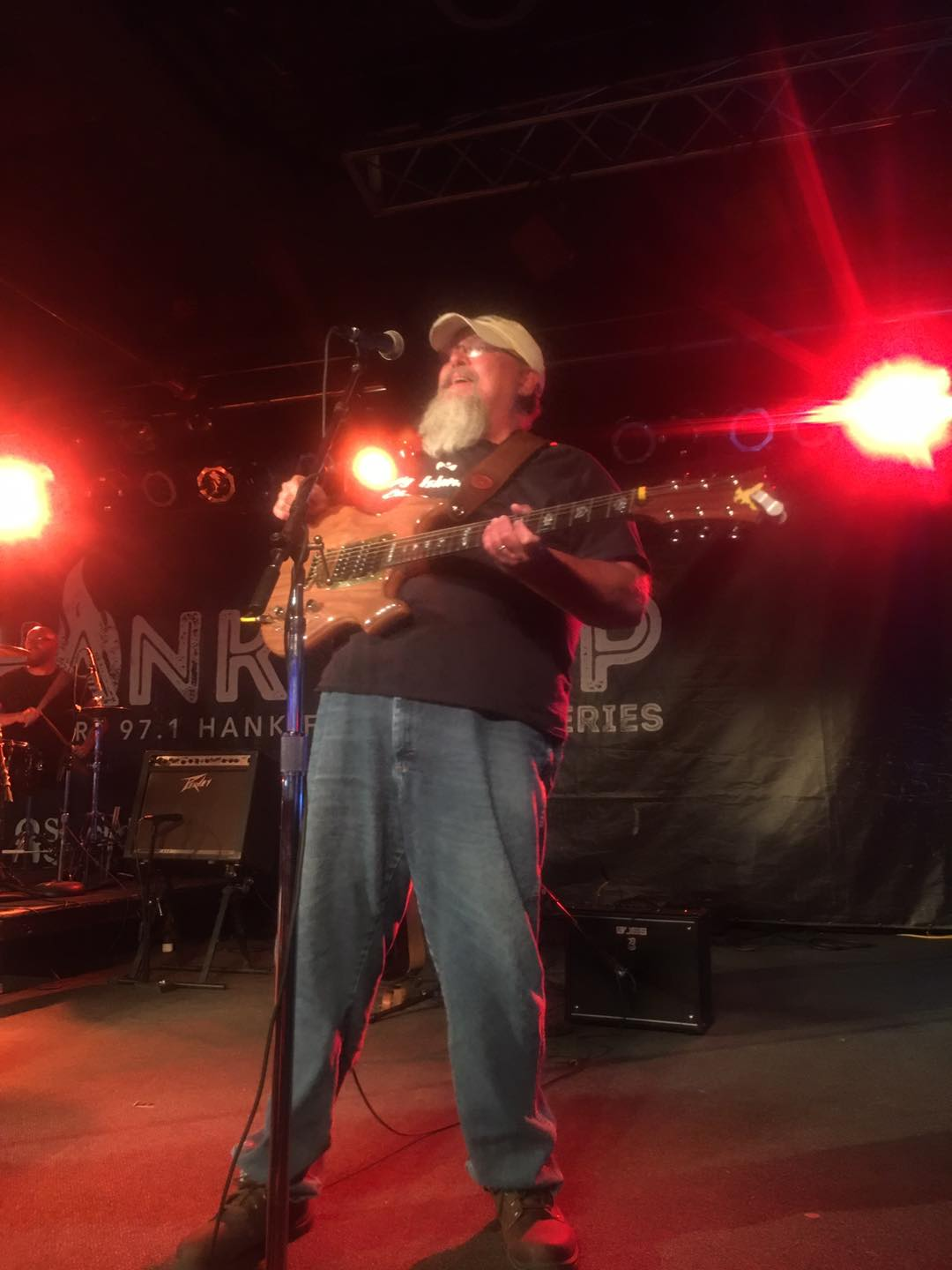 From the crowd’s perspective, it looks like the musicians are having a blast, creating high energy for them, and they are!

Franklin is getting ready to feel the thrill of performing once again. It will happen in front of one of his biggest audiences, yet, in his upcoming concert with Nic Strain. Nic Strain is opening for country music singer and CMA award winner Lee Brice at The Mill in Terre Haute on Sept. 4 at 7 p.m.

With all the preparations that go into making shows happen, Franklin says jamming out with the audience is a must-have.

"Vibing with the crowd is something that definitely must happen," he said. "I know that I’ve got a job to do on stage and I do it, and I have a blast doing it. There’s nothing better than hearing people screaming lyrics back at you so loud that you hear yourself. Sometimes the crowd is just singing away, and you have to know where you’re at with the music."

Being in a band is much more than cheering crowds, and rehearsing for big gigs. It is about the bonds and friendships made in the band. Having that connection between bandmates is one of the greatest satisfactions about being in a band.

After being in about 100 bands, Franklin knows a lot about the meaning of friendship among members

"The camaraderie is definitely my favorite part of being in a band," he said. "It's like a big family. Being in a band at any point in time is pretty much like a club, we all come from different backgrounds, and we're making music together. Music is possibly the closest thing you could do with another person, as for getting inside their head and feeling them out. It’s what makes the bond tighter. I’ve been in about 100 bands ranging from a one-time gig to tours, and friendship has been a huge part of what makes a band work and meshes well together." 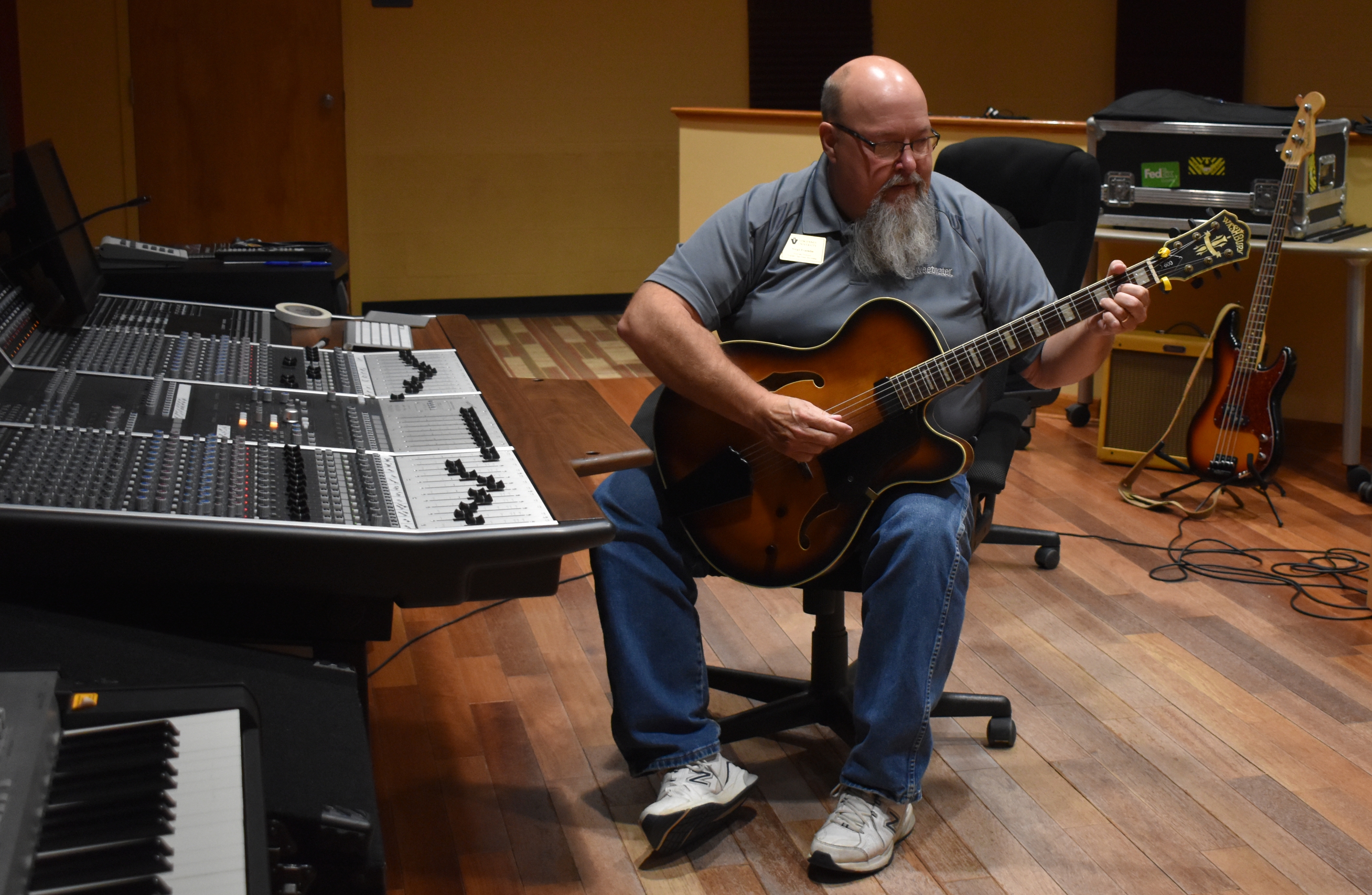 Franklin in the Mellencamp Audio Recording Studios on the Vincennes Campus

Besides showing his passion through music, Franklin is also the program chair of VU’s Audio Recording program, which is based in the Mellencamp Audio Recording Studios, a state-of-the-art educational, audio facility that pays tribute to one of VU's most famous and accomplished alumni, John Mellencamp (Class of 1973).

"The big difference between a career and a job is that a job is something you have to do," Franklin said. "A career is something that you love to do every day. I get up every morning supercharged to get out the door and go to work. I want to do this, and I want to be here. My heart and soul are in Vincennes University, as well as my music."

Not only does Franklin have a career in audio recording, but he incorporates it into his daily life as well. He has composed nearly 600 pieces of music for around 60 movies and television specials, with many on IMDb.

A friend reminded Franklin that sometimes when someone starts teaching, they forget what it is like to learn. From that moment on, Franklin decided that every two years or so, he would learn a new instrument so he would never forget what it’s like to be in a student’s position.

"I pick up an instrument and find someone to teach it to me," he said. "For me to teach it and not do it is hypocritical. I want kids to see me, even if it’s just playing at a farmers market or running sound."