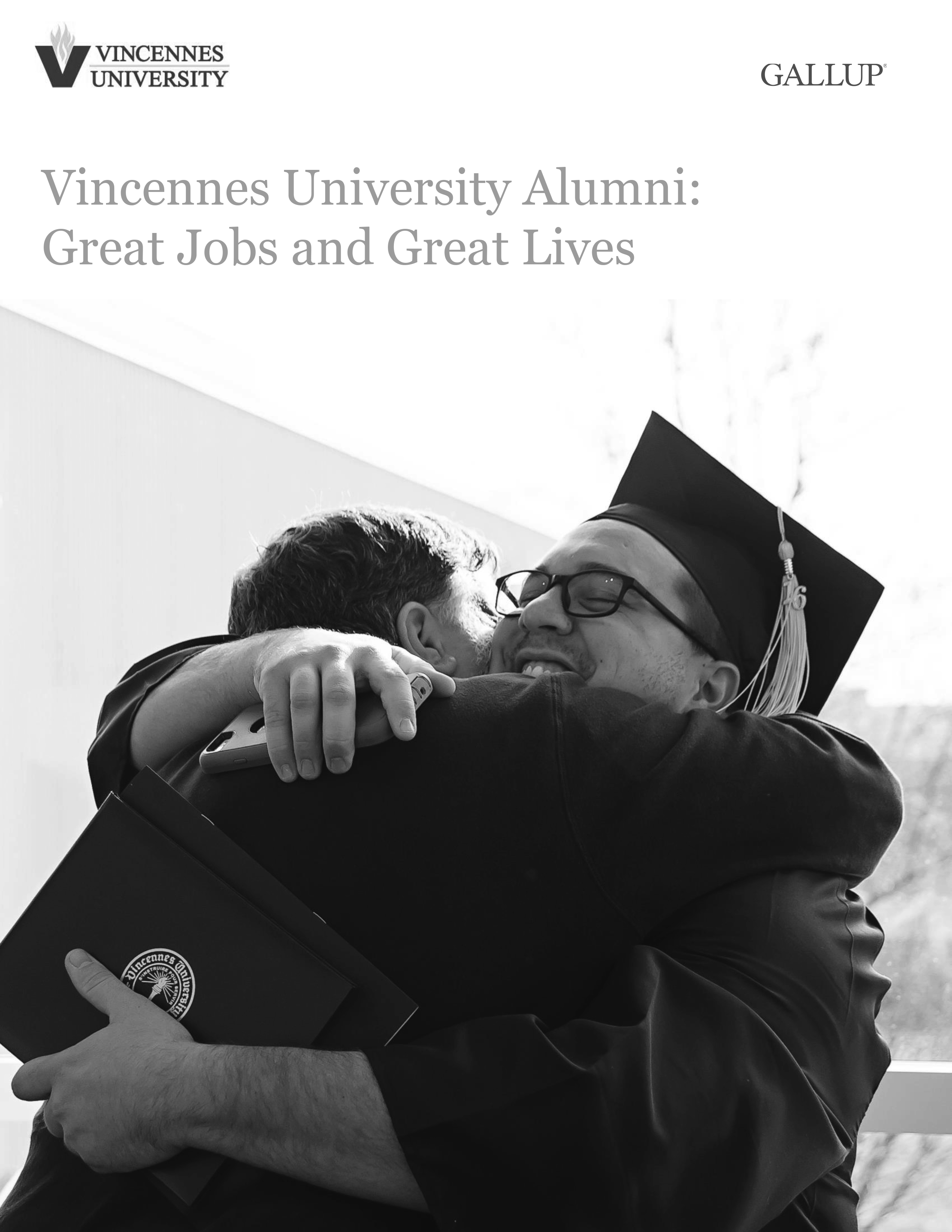 If they had to do it all over again, an impressive 91 percent of Vincennes University alumni surveyed would still attend the school according to the Gallup-Indiana Graduate Satisfaction Survey.The survey measured workplace engagement, well-being, college experiences, and alumni attachment. VU scored higher than other schools in Indiana and outpaced the national averages in many areas.VU alumni also noted that:

“VU faculty and staff are dedicated to student learning and success and this survey shows why they remain our top goals,” VU President Chuck Johnson said. The national survey, which included 11 other Indiana schools, examined the connection between graduates and their alma mater. Fifty-one percent of alumni surveyed strongly agreed VU was the perfect school for people like them, confidently placing VU above the 34 percent average nationally and 39 percent among schools across the state.“Numerous studies show a link between the student-faculty connection and student learning and success, and VU did very well on that dimension compared to the Indiana and national samples,” added Johnson. For VU, 47 percent of alumni strongly agreed that professors cared about them as a person, decidedly outperforming the 28 percent national average and 31 percent among other participating schools in Indiana. VU also ranked very high in alumni who are satisfied with their employment after graduation. Among VU alumni surveyed, 79 percent shared they were deeply interested in what they do and 68 percent have the ideal job. The connection between education and career goals is especially strong for VU graduates with 50 percent expressing that their current work is completely related to their undergraduate major compared to 35 percent nationally and 37 percent throughout the state. Sixty-percent of VU alumni expressed they are motivated to achieve their goals and like what they do each day, compared to 53 percent among graduates both nationally and statewide.“It is particularly gratifying to see how favorably Vincennes University alumni rate their experiences compared to alumni from other schools nationally and throughout Indiana,” Johnson said. “Such results don’t happen overnight. They are the product of years of planning and effort by everyone in the Vincennes University community.”

Other significant findings reveal that:

“These results reinforce that VU’s focus on delivering a quality education produces results for our alumni immediately after graduation and throughout their careers,” Johnson said. The web-based survey was conducted from Jan. 22 to Feb. 19, 2018, and 1,338 VU alumni participated. Surveys were submitted by VU alumni who earned associate degrees between 1950 and 2018. Data from VU was compared with data from the national Gallup-Purdue Index study of more than 71,000 college graduates. In addition to VU, the other Indiana schools that participated in the survey were Ball State, Butler, Ivy Tech, Calumet College of St. Joseph, Grace, Indiana University Southeast, Indiana University-Purdue University Fort Wayne, Marian, Purdue University Northwest, Taylor, and Western Governors University-Indiana. The Indiana Commission for Higher Education released the survey. See results for participating Indiana schools at https://www.in.gov/che/4623.htm.