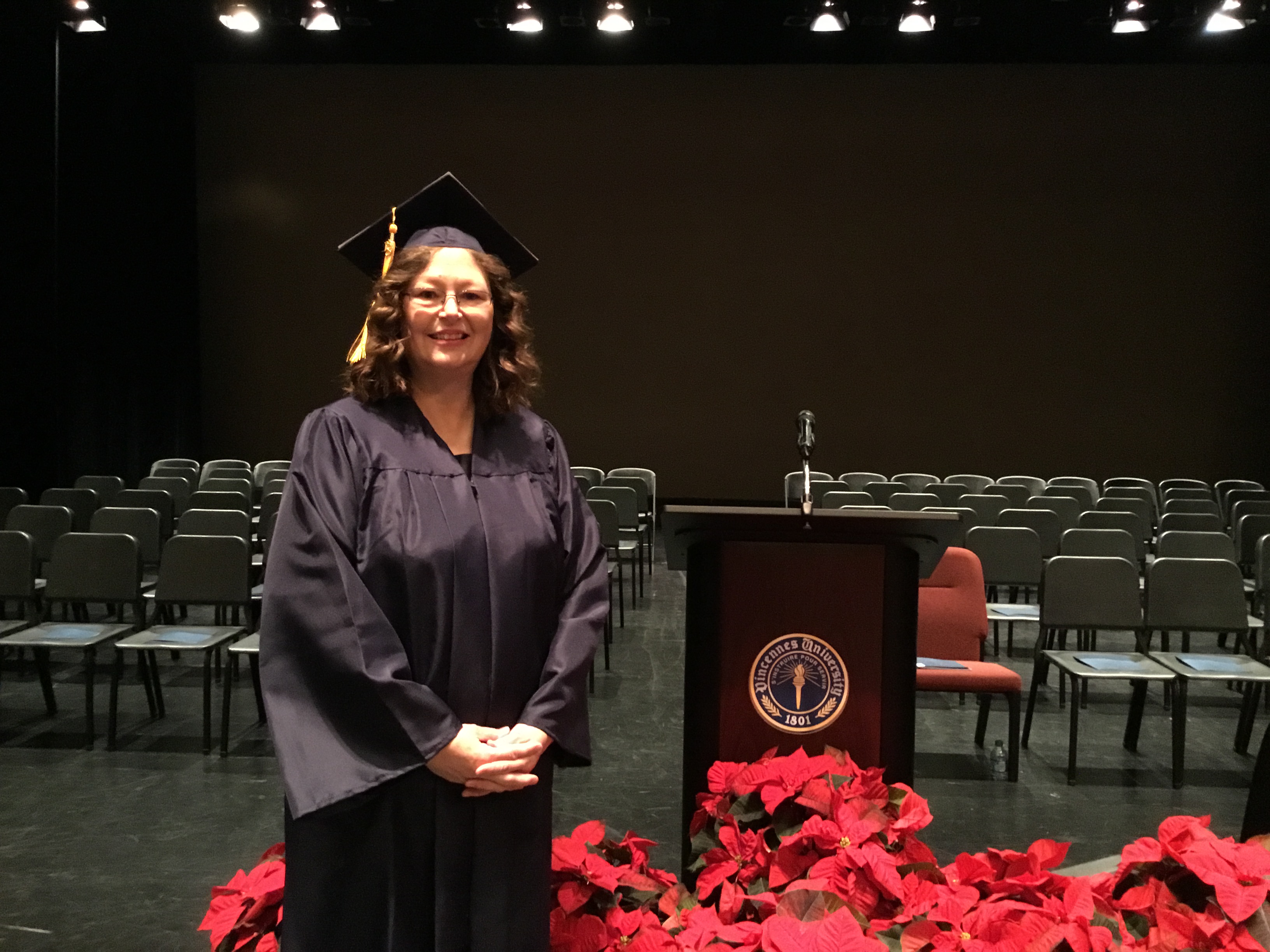 "When making a dream possible, frequently it is not based on ease or convenience".

Working a full-time job, tending to the needs of a family, and pursuing a college degree is an arduous task. Kathy Lengel met the challenge, conquered it, and now she’s a Vincennes University graduate.

Wearing a graduation cap decorated with photos of her husband and three children as a way of thanking them for their support, Kathy accepted an associate of science degree in health information management at Mid-Year Commencement exercises on Saturday.

Kathy made a lengthy trip to campus for the graduation ceremony. She lives in Reading, Pennsylvania, and prior to that day had never set foot on campus. Yet there she was, at the Red Skelton Performing Arts Center, walking across the stage and accepting her degree. A beaming smile highlighted her face as she stood in recognition when VU President Chuck Johnson commended her accomplishment during his graduation address.

A journey that began in 2009, then resumed in 2015, is now complete. She has made her dream reality and encourages others to do the same. “Now that I am done,” Kathy said, “I realize the true value of my education.”

Kathy is a Clinical Documentation Services manager at Penn Medicine Lancaster General Health in Lancaster, Pennsylvania. She has worked in the health information management field for 25 years, including 20 years as a manager, without a degree. Nearly a decade ago she decided it was time to earn one and opted to pursue a degree through Vincennes University’s Distance Education Program.

“In addition to choosing VU because I had a coworker who graduated from the HIM program, I was also drawn to VU because of the cost,” she said. “VU was very affordable compared to other colleges that I looked at.”

Kathy glowingly praised the health information management curriculum and its approach to education. What blew her away was the program’s depth.

“So many people I spoke with who completed HIM programs elsewhere expressed their classes were not as detailed as some of my classes were, and [VU’s] internship requirements were definitely beefier than others,” Kathy said.

“The syllabus is so complete. I’ve met with people and they’ve said, ‘I’ve never seen a syllabus this intense.’ A lot of people in my department have gone through programs and they have never seen a syllabus like this for an internship. What I’m walking away with from the internship is so much more than other students who come through where I work. We host students all the time and they never have to do the things I had to do for my internship.”

In Kathy’s case, the full support of professors and instructors proved to be just as important for her as that of her family and colleagues, and with their help she kept moving ahead with her enterprise.

“I appreciate all the support I had from the professors,” she said. “I asked a lot of questions and everyone has been wonderful with that. If I had a question, they were quick to answer. If I didn’t understand something, I reached out to them and they provided an answer. It’s been a very, very good experience for me.”

Colleagues and friends at Penn Medicine Lancaster General Health threw a surprise party in celebration of Kathy’s achievement. They played the graduation march, decorated the office and hallway, and presented her with VU merchandise they had ordered from the VU bookstore and a cake featuring VU’s logo.

Kathy hadn’t originally planned to attend commencement, but that changed after she was reminded that she urged one of her children to walk in his college graduation ceremony a couple of years earlier. For a two-year period, Kathy and her three children were all enrolled in college at the same time.

“When I said I’m not walking, my husband said, ‘Really? Let me get the kids involved here,’” she said. “So they persuaded me to come out and I’m glad I did it.”