VINCENNES, Ind. – Vincennes University great and NBA Hall of Famer Bob McAdoo is truly a trailblazer, and the NJCAA is celebrating his outstanding contributions and accomplishments with a special honor.

McAdoo was inducted into the inaugural 2021 NJCAA Foundation Hall of Fame class on June 24. The NJCAA Hall of Fame seeks to honor individuals who have paved the way for opportunities at the two-year level, athletically, professionally, and those who have impacted the NJCAA through other areas of influence. McAdoo and six others received in a virtual ceremony the highest honor the NJCAA bestows upon individuals.

"It’s an honor to have been selected to the inaugural 2021 National Junior College Hall of Fame Class,” McAdoo said during his acceptance speech. "I’m extremely appreciative of my time at Vincennes and to be recognized with this prestigious award. My time in junior college helped me lay the foundation for my hall-of-fame NBA career. The two years I spent at Vincennes not only helped me mature as a student but also prepared me for the biggest stage of NCAA Division I basketball. I won my first national championship at Vincennes University." 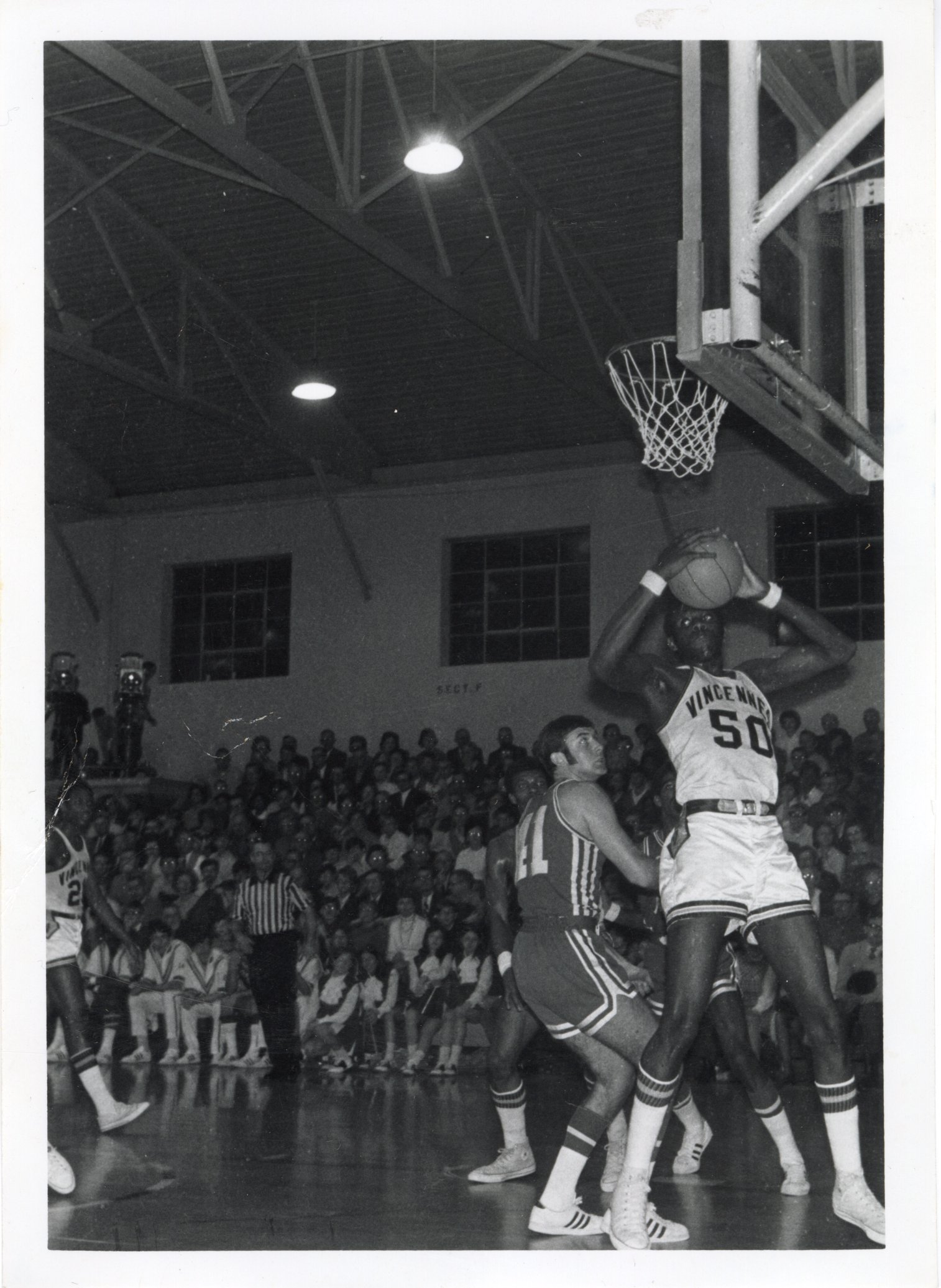 He was enshrined in the Naismith Basketball Memorial Hall of Fame in 2000 following an illustrious 14-year NBA career. In 1984, McAdoo was inducted into the NJCAA Men's Basketball Coaches Association Hall of Fame.

Considered one of the game’s best shooting big men of all time, McAdoo played for VU from 1969 to 1971 and finished with 1,202 career points. His 27 points in the title game led the Trailblazers to their second NJCAA Division I Men’s Basketball Championship in 1970. He was named an NJCAA All-American in 1971. 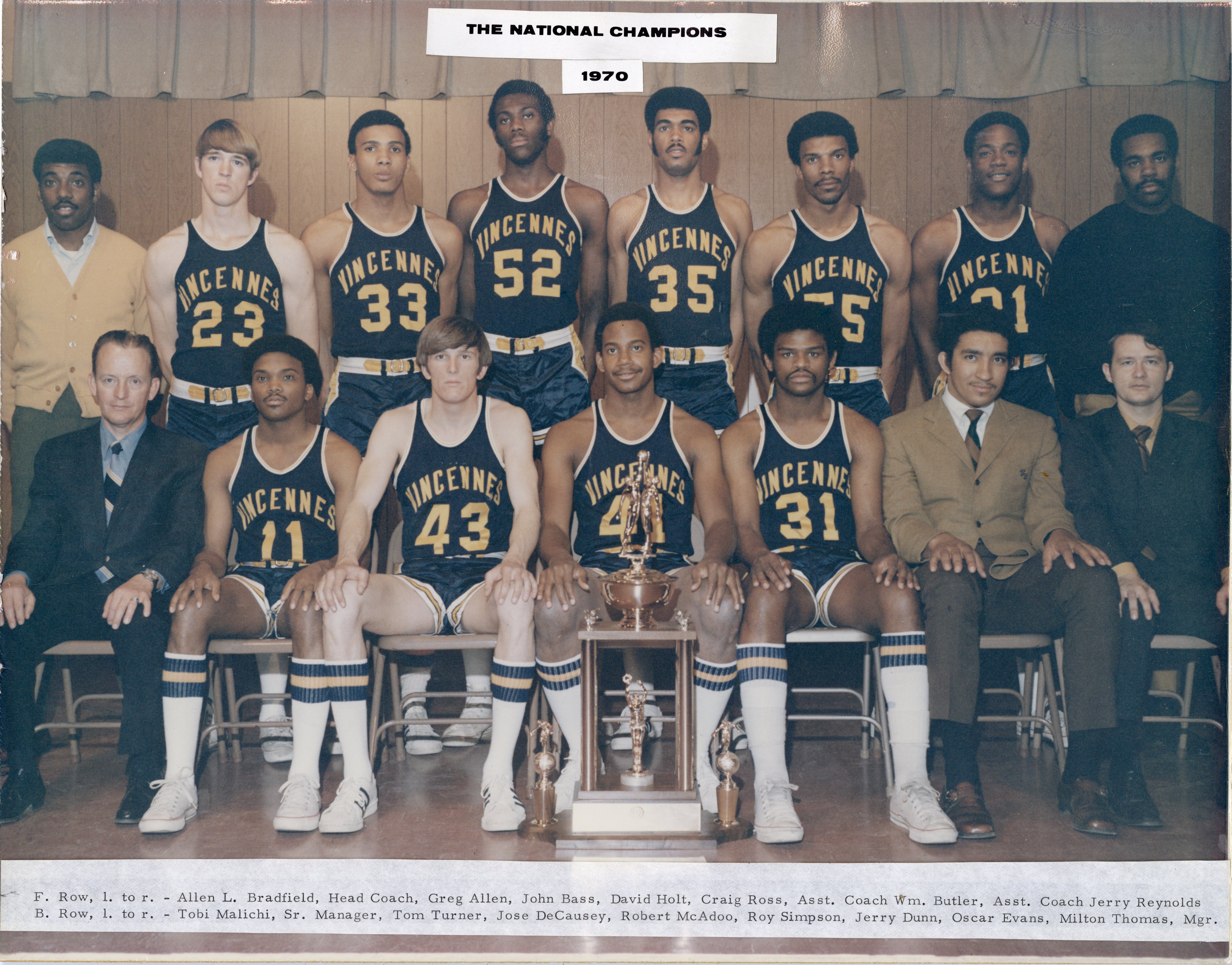 "During my freshman year, we won the national championship in Hutchinson, Kansas,” McAdoo said. "It was a big deal for me and my teammates because it opened up a world of recruiting opportunities for me and my teammates. It was a big thrill for me because it marked the first time in my life playing in front of a packed arena of that size in Hutchinson. My teammates and I started receiving offers from prestigious Division I university programs, and I personally was invited to try out for the World Games and the Pan American Games where I was selected as a participant."

"Being a kid whose whole life has revolved around basketball, I knew of Bob McAdoo for quite some time,” Meeks said. “Then when I came here and started coaching, I began to realize just how much influence on VU he had even though he had not been here in so long."

Added Meeks, "I hope that the older generations in Vincennes will tell their children and their grandchildren stories about coming out and watching McAdoo play at Vincennes, and tell them that he was a player here, a member of the University family, and relay to them how proud we are that he was a student here, and what a good role model he has been for young aspiring basketball players." 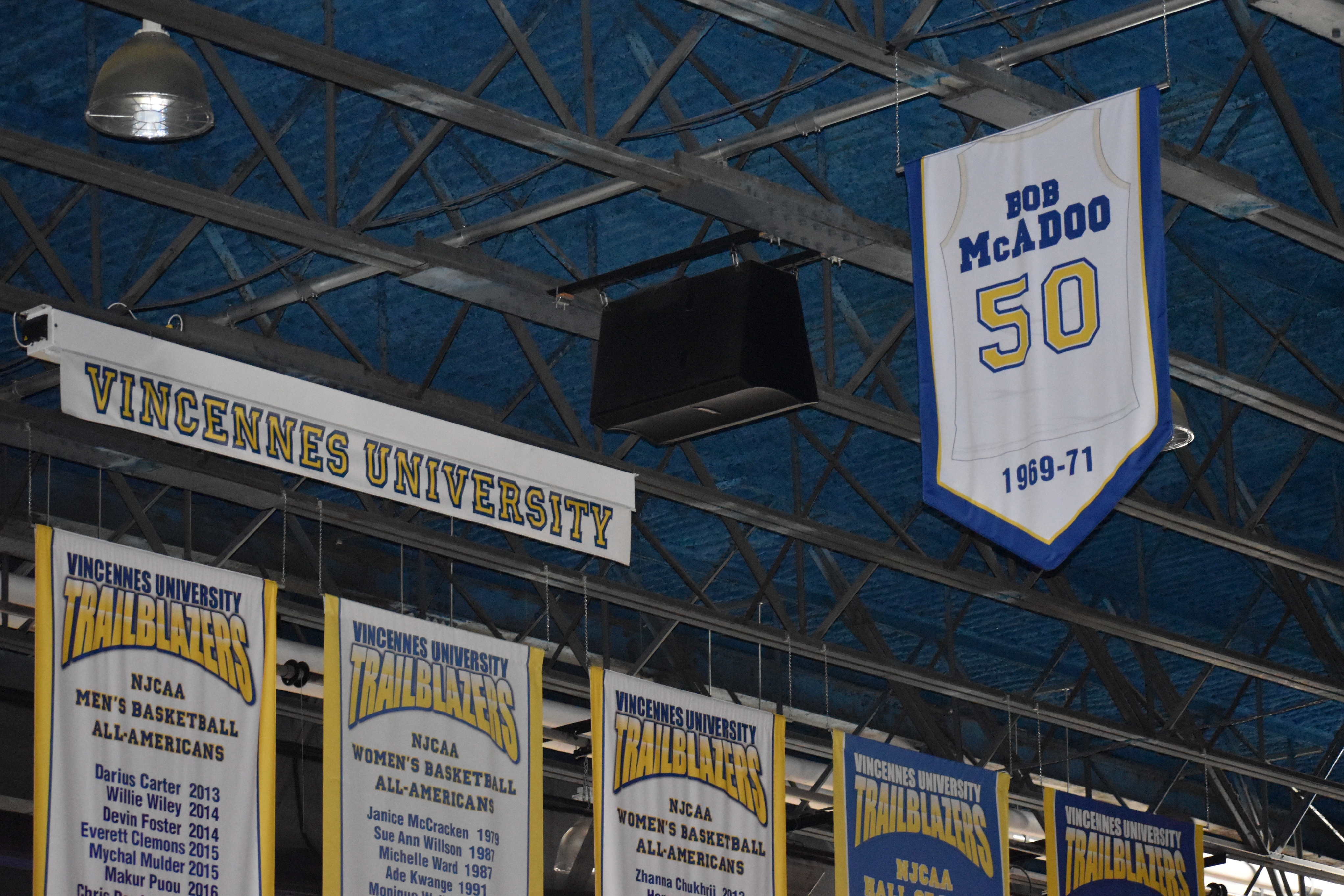 During his VU playing days, fans celebrated and cheered McAdoo in the historic Beless Gymnasium. His No. 50 currently hangs prominently above the court in the P.E. Complex down the street.

"Every player that comes in here gets a history lesson about the great players who have come through here, and they are all held to a standard that we now have to uphold, and it starts with Bob McAdoo,” VU Hall of Fame Men’s Basketball Coach Todd Franklin said. “Not only is he one of the 50 greatest players who ever lived, but he’s been the right kind of guy with it, too. The impact that has on Vincennes University, its name recognition, and being associated with that, it’s immeasurable for our basketball program."

Added Franklin, "We’re probably the most famous junior college program in the country, and that’s because of guys like Bob. He would have to be at the very top of that pyramid of ‘Who are your greats’. You can’t put anybody else above Bob McAdoo. I don’t know how you put a value to what Bob McAdoo has done for this school and the men’s basketball program, but we are all indebted to him." 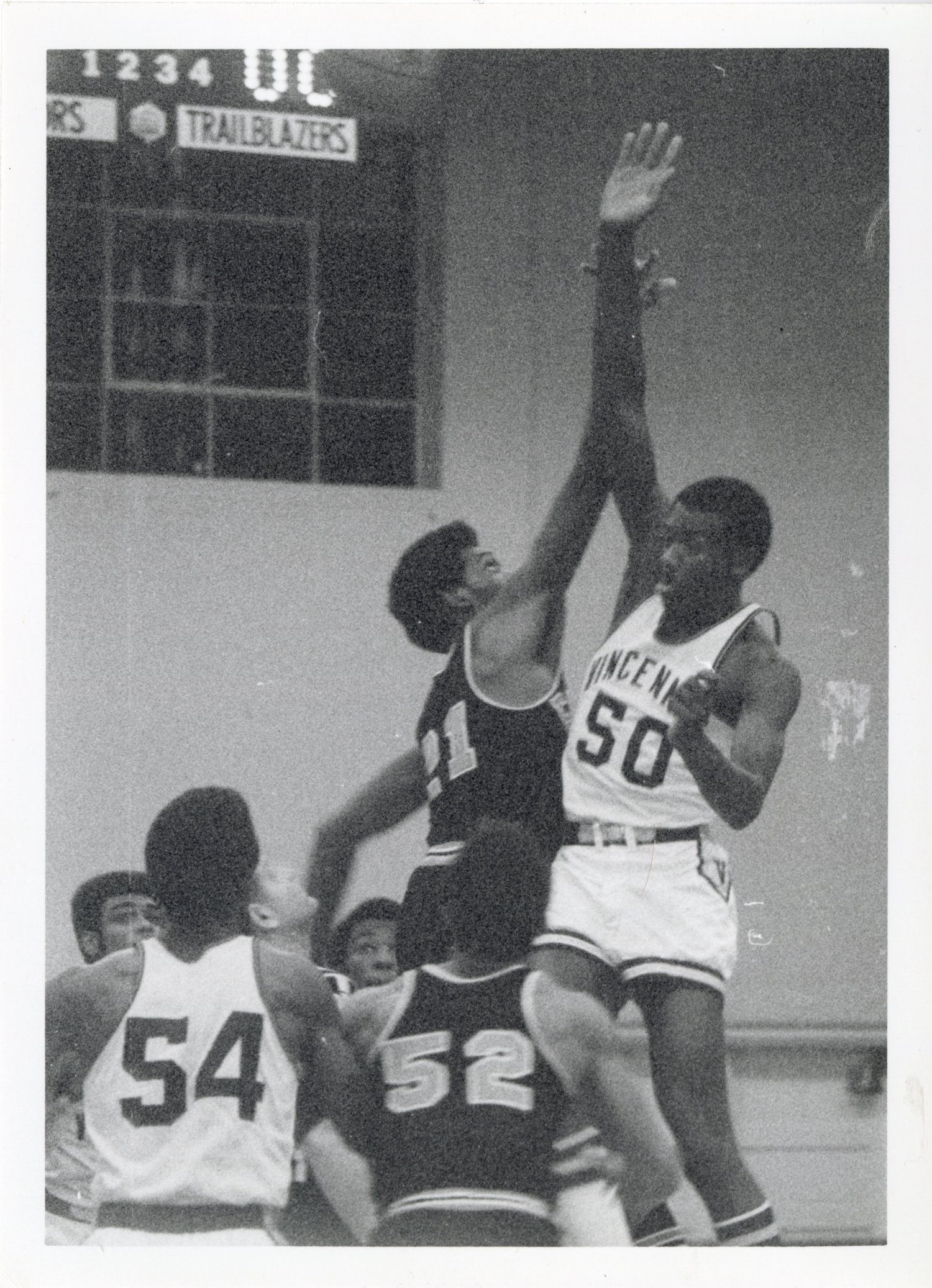 Following his VU career, McAdoo played for Team USA at the 1971 Pan American Games in Colombia, then returned to his native state, where he played for the renowned University of North Carolina Coach Dean Smith. McAdoo garnered First-Team All-America honors and helped the Tar Heels reach the 1972 NCAA Final Four.

"The level of competition in junior college prepared me so well to make the smooth transition into Division I University of North Carolina under the guidance of legendary coach Dean Smith,” McAdoo said. “I became the valuable piece to their puzzle that made the Final Four the year of my transfer. The lessons I learned at Vincennes never left me and helped carry me through a long and successful NBA career, including two NBA championships and a successful European career where I won two Euroleague championships."

Chosen by the Buffalo Braves, McAdoo was the second overall pick in the 1972 NBA Draft. He was the 1973 NBA Rookie of the Year and 1975 NBA Most Valuable Player and amassed three scoring titles, all in the first four years of his professional career. He won NBA championships with the Los Angeles Lakers in 1982 and 1985. The five-time All-Star scored 18,787 points and averaged 22.1 points during his NBA career, scoring in double figures in all but one season.

One of Franklin’s first basketball memories is of the Buffalo Braves with McAdoo.

"Bob McAdoo, to me, was a guy who was synonymous with basketball when I was a kid growing up," Franklin said. "He is one of the pillars of basketball, period, so what does that mean for Vincennes? Here’s a person that not only helped to build this program at VU, but this is a guy who played in Final Fours and won titles in the NBA. The opportunity to have a guy like that, with your name attached to him forever, from a basketball standpoint can’t get any bigger. The fact that he has been a pillar in the NBA, in terms of being a highly respected guy, McAdoo is a guy who exemplifies what you want out of your great players."

After the NBA, McAdoo played in Europe for seven seasons. He averaged more than 20 points or more in six of those seasons. He retired in 1992, yet his basketball journey continued.

He returned to the NBA as an assistant coach, winning three championships with the Miami Heat and helping them to five NBA championship series. McAdoo is currently the Heat’s scout/community liaison. 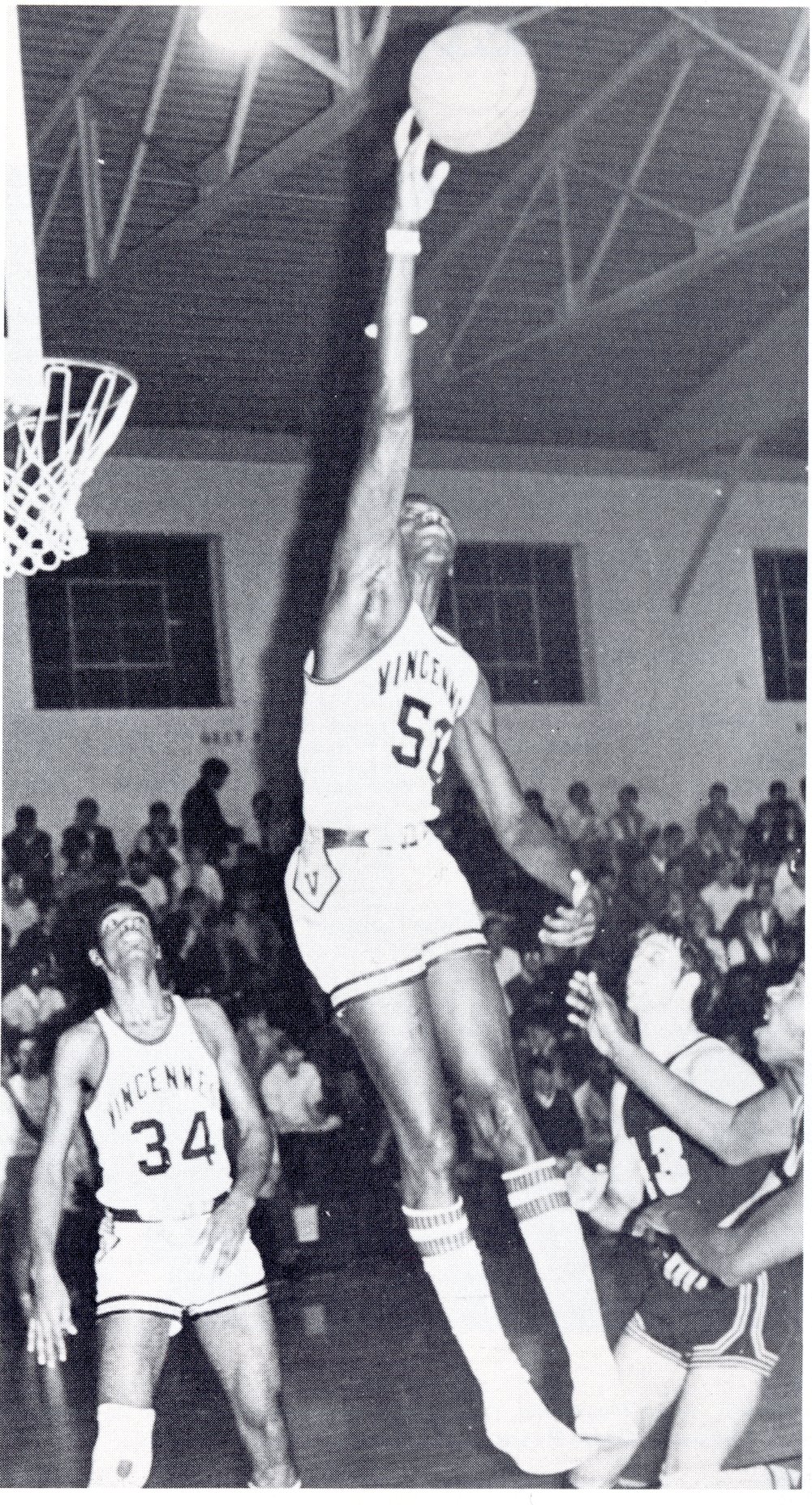 "He was, for a particular time, the best basketball player in the world, when he was playing in Buffalo and winning MVPs and scoring titles," Meeks said. "Bob McAdoo’s association with Vincennes University has had a positive impact on the school, especially in the sports world. When I go back home in North Carolina and wear Vincennes University shirts and things with VU on them, even on the East Coast, everybody knows Vincennes, knows what Vincennes University is, and knows where it’s located. They know VU as a Midwest school that has a great basketball program, and it all emanates from that particular time in the 1970s when Bob McAdoo was here. From Vincennes to the East Coast, VU got a lot of notoriety and a lot of press because Bob McAdoo was here."

Added Meeks, "I’ve seen in the NBA playoffs all the time this season where players are breaking his records, and I've seen Bob McAdoo’s face more in the last two weeks than I’ve seen in the last 10 years. Several times I’ve seen Vincennes University listed as one of his schools. That helps us and helps people recognize that Bob McAdoo did play here and that he is one of the greatest basketball players of all time."

A Great In Every Way

McAdoo thanked his many coaches and teammates for helping him achieve the amazing levels of success that he has.

"I will continue my effort to be the best ambassador of basketball that I can be,” he said. "This accomplishment is not something I did alone. So many people helped me along the way. I will love to start by thanking my Vincennes coaches: Coach Allen Bradfield, Coach Jack Butler, and Coach Jerry Reynolds that scouted and brought me to Vincennes. My talented teammates helped also in this process with my development."

In elevating the statures of VU and the NJCAA, McAdoo has made a lasting impact appreciated by many, many individuals.

"In juco athletics, basketball is the bell cow over the years," Franklin said. "It gets so much attention, even more than football because there are so many less schools that play football. So basketball has been the prime deal in juco, and no one has ever been better at it than Bob McAdoo. Whatever I do for the rest of my career, I’m going to be best known for juco basketball. Bob McAdoo made it better to be a juco guy. How many people can say that they made an entire group as big as juco basketball better and gave them more credibility? That’s the biggest thing you can say about Bob, and all he did to uplift the reputation of Vincennes University, the reputation of junior college basketball, and the reputation of junior college athletics.”